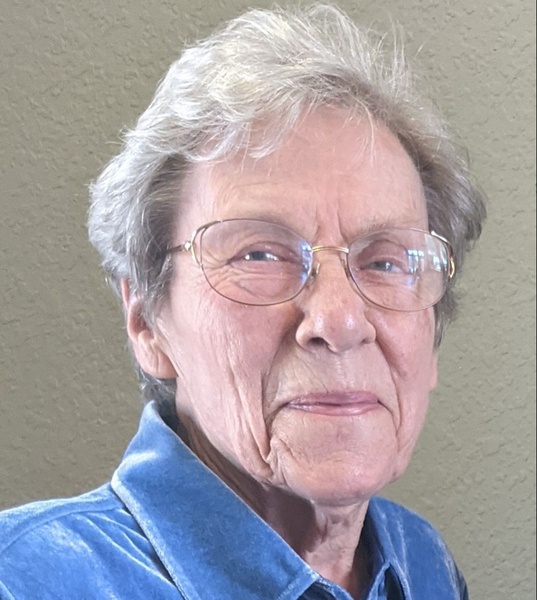 Mary Ellen (Kallander) Hogarth, 88, of Denton, Texas, passed away peacefully on March 15, 2022, at her daughter’s home in Rector, Pennsylvania. She was born Mary Ellen Melville on November 24, 1933, to William Harold and Mabel (Benter) Melville in White River, South Dakota, the youngest of six children. After the death of her biological mother, Mary Ellen was adopted as an infant by maternal relatives Knute and Gladys (Benter) Kallander of Burke, South Dakota. She began playing the piano at the age of five and would later play professionally as a church musician and as a teacher. After her father and mother passed away in 1946 and 1948, respectively, Mary Ellen moved to Eagle Pass, Texas to live with her aunt and uncle, Glenn and Ruth Benter. Upon graduation in 1950, she enrolled at the University of Texas at Austin to study education. She completed her bachelor’s degree at the University of Nebraska at Omaha, began teaching first grade at Rosehill Elementary School, and soon met Bruce Hogarth through family friends. They married on June 5, 1956, in Omaha and settled in north Texas a few years later. Their son, Matthew Howard, was born in 1959 in Fort Worth, followed by a daughter, Lisa Ann, born in Denton in 1961. Mary Ellen taught kindergarten at Keller Elementary School for 23 years and gave piano lessons after school. She was also a member of the Ariel Club and was involved in local school desegregation efforts in the 1960s and 70s. After retiring from teaching in 1989, she continued to devote much of her time to children in the community as a volunteer at the Treehouse after-school program and Denton Christian Preschool. Mary Ellen loved music, gardening, and spending time with loved ones. She enjoyed traveling with the First Methodist “Trippers” on many occasions. She was an active member of her church community at St. Andrew Presbyterian Church for many years, where she served as an elder and deacon and was a member of the Presbyterian Women’s Association. Mary Ellen is survived by her daughter, Lisa Rosenberg (Russ) of Rector, Pennsylvania, grandchildren Rachael and Sarah; daughter-in-law, Shelley (Armendariz) Hogarth, of Alpharetta, Georgia, and grandchildren, Vincent, Bryce, Chase, and Alina. A memorial service for Mary Ellen will be held at St. Andrew Presbyterian Church on April 2, 2022, at 10:00 am, followed by a reception. In lieu of flowers, donations can be made to Denton Christian Preschool and a memorial fund for educational programs at St. Andrew.

To order memorial trees or send flowers to the family in memory of Mary Ellen Hogarth, please visit our flower store.