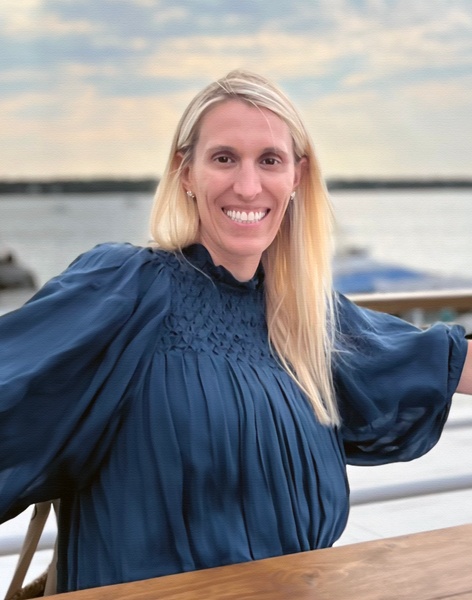 Rachel, of Latrobe, was called to heaven on Wednesday, August 3 while vacationing with family in North Carolina. She had an outgoing personality and charismatic nature that will be sorely missed by all those who were fortunate enough to have known her. Rachel was incredibly compassionate and always willing to help those in need. These qualities will serve as an enduring legacy for her beloved children, as well as everyone graced by her friendship.

Rachel is survived by her husband of nine years, William N. Ferguson, as well as daughter, Grace S. (7) and son, Charles M. “Charlie” (6). She also leaves behind her grandmother, Joan Cooper, parents, Jane S. (Cooper) and David S. Sapone, as well as brother, Samuel C. Sapone and his wife Lauren (Weaver) and their daughters, Stella, Lily and Sophie, all of Greensburg, as well as in-laws, Ranny and Jay Ferguson of Pittsburgh, Melissa and Kelly Hutchison of Illinois and Laura and Rob Ferguson of Ohio, and their respective children, Cole, John and Tom of Illinois, and Henry and Caroline of Ohio. Rachel also was blessed by her numerous aunts, uncles and cousins throughout her life. She was preceded in death by brother, Michael D. Sapone, as well as grandparents, James Cooper, Edward and Stella Sapone.

Rachel graduated from Latrobe High School in 2001 and from Dickinson College in 2005. After college she worked at Vineyard Vines in Stamford, Ct. She eventually returned to western Pennsylvania and founded RSVP Greensburg. It was during this time that she and Bill were introduced to one another. They were married in May of 2013 and welcomed the addition of their children in the coming years. In 2016, as they were awaiting the arrival of Charlie, she transitioned from RSVP to work at Meegan Ford in Mt. Pleasant, now in Connellsville, in an effort to spend more time with family.

Family and friends will be received for visitation on Tuesday, August 16 from 11am to 2pm and 4 to 7pm at St. Michael’s of the Valley in Rector, Pa. A memorial service will be held outdoors at St. Michael’s on Saturday, August 20 at 10:30am. Arrangements are being coordinated through Snyder – Green Funeral Home in Ligonier, Pa.

In lieu of flowers please consider a contribution to the Rachel S. Ferguson Memorial Fund, by contacting evalyn.korzen@pnc.com, or the 529 educational accounts for Grace and Charlie, by contacting pdggroup@morganstanley.com.

Psalm 34:18 The Lord is near to the brokenhearted